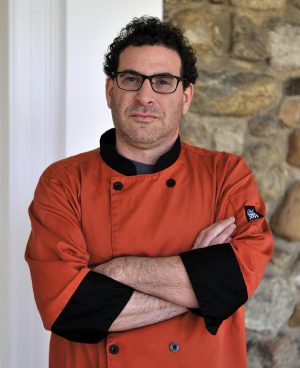 Scott Jay “Jake” Jacobson passed away suddenly on November 1, 2022.  Born in Brooklyn, New York, he was raised in East Windsor, New Jersey after his family moved when he was young.

Scott was a beloved and renowned local chef known for his simple, elegant, impeccable French fine dining cuisine. He received his AOS Culinary Arts degree from the Culinary Institute of America, after which he worked in resort and restaurant kitchens in St. Thomas, Colorado, New Mexico, New Jersey, and New York City. He was Sous Chef of Firebird Restaurant and Rene Pujol in New York City. His dream of being Executive Chef was first realized at Zoe’s by the Lake in Sparta, New Jersey, a beloved restaurant of many near and far. He was later the Executive Chef of Amsterdam Restaurant and Tapas Lounge in New York City, Hudson Farm Club in Andover, New Jersey, and most recently at CJ Steakhouse in Wharton, New Jersey.

Scott had many passions. He was an avid sports fan and life-long fan of the New York Mets, Tennessee Titans, New York Knicks, and New York Islanders. He had a deep love of animals, especially dogs, whom adored him. He loved music and live concerts, especially the Grateful Dead, Phish, Phil Lesh, and Bob Weir. He was a member of the Lake Hopatcong Dart Association since 2004, where he was affectionately known as “Jake.” He loved golfing and enjoyed many television shows. Most especially, he loved spending time with his wife Michelle and their pets at their home in the woods of Andover, New Jersey.

Scott was the beloved husband of Michelle Scollo, loving son of Phyllis and Burton Jacobson, brother of Mindy Jacobson and Jeffrey Jacobson (wife, Tara), son-in-law of Gloria and Nathan Scollo, brother-in-law of Michael Scollo (wife, Tracy), Uncle to Samantha, Justin, Ashley, Alexandra, Eva, and Kathryn, and childhood best friend of Jordan Katzman. He was an incredible “Fur Dad” to many dogs and cats over the years including Casey, Charlie, Lucy, Calvin, Harry, Libby, and Roman. He leaves behind many childhood friends, dart buddies, and friends in the restaurant industry. He is predeceased by grandparents Ida and David Levine and Mildred and Leon Jacobson.

Scott was a registered organ donor.  His heart, lungs, liver, and kidneys were matched with recipients through the NJ Sharing Network.

Donations in Scott’s memory may be made to Father John’s Animal House in Lafayette, New Jersey (https://www.fatherjohns.org/donate/) or to a charity of your choice in his memory.

Funeral Home:
Bradley-Braviak Funeral Home Funeral:
A Celebration of Life will be held in New Jersey at a later date. More information will follow. Memorial Gifts:
Donations in Scott's memory may be made to the charity listed above in the obituary.