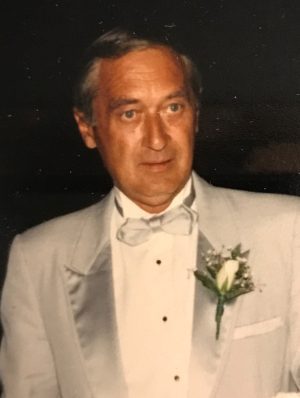 Stephen J. Kovach, Jr. passed away surrounded by his family on November 1, 2022 at the age of 90. Stephen was born in Brownsville, PA to his parents Mary Ann and Stephen, Sr.  Shortly after graduating from high school, he enlisted in the Army where he proudly served in the Signal Corps during the Korean War. After being Honorably Discharged, he attended California State Teachers College, where he received a Bachelor of Science Degree in Education. He went on to become a well-regarded math teacher at North Plainfield High School where he taught for 30 years before retiring in 1994. While at NPHS, he earned a Master’s Degree in Math from Fairleigh Dickinson University. In addition to teaching, Steve coached the track team and taught Math in the Adult School.

Steve is survived by his wife of nearly 60 years, Gloria, along with his children, of whom he was so proud: daughter Lisa Hackett and spouse Kim; son Dr. Stephen J., III and spouse Dr. Suzanne Pesce. He will be dearly missed by his beloved grandchildren Stephen J., IV (Jack) a freshman at Colgate University, and Elena, a high school junior. He also has a step grandson, Drew Hackett and spouse Abby and 2 step great grandchildren -Dale and Audrey Hackett.

He has 3 surviving siblings: Joseph, John, and Mary Seibert.  A sister, Yolanda, predeceased them.

He is also survived by several nieces and nephews.

A celebration of Stephen’s life will be held at a date, place and time to be announced.

Funeral Home:
Bradley-Braviak Funeral Home Committal:
A celebration of life will happen some time in the future and will be updated here.