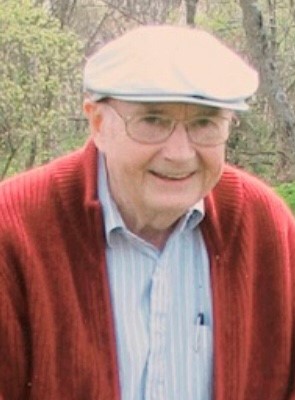 Sterling E. Soderlind (known as Jim), a retired executive of Dow Jones & Co. and a

former Managing Editor of The Wall Street Journal, died on May 11, 2022. He was a

longtime resident of Short Hills NJ, moving to West Caldwell NJ in 2008. He was born Sept. 6, 1926, in Rapelje MT, the son of William J. and Florence Soderlind. His father founded a bank in Rapelje.

Selected as a Rhodes Scholar in 1949, he attended Oxford University, 1950-52, studying Philosophy, Politics and Economics at Keble College. At the University of Montana he earned a B.A. degree in journalism and history in 1950.

Mr. Soderlind began his newspaper career as a reporter for the Minneapolis Tribune in 1952. He joined The Wall Street Journal as a reporter in Chicago in 1955 and a year later became head of the Journal’s Southeast News Bureau in Jacksonville FL. He was transferred in 1957 to New York where he served successively as Journal Page One Editor, Managing Editor, a Page One Journal columnist and Economics Editor for all Dow Jones publications.

He was named Vice President for Planning at Dow Jones in 1977 and played a role in starting Wall Street Journal editions in Asia and Europe. He also was active in the company’s acquisition of community newspapers throughout the United States. He retired in 1992.

Mr. Soderlind served in World War II as an electrician aboard the USS Wasp, an aircraft carrier, in the Pacific. He was a member of the American Association of Rhodes Scholars and Community Congregational Church in Short Hills. He also had a summer residence in Minocqua WI.

He is survived by his wife, the former Helen Boyce, and two daughters, Lori and Sarah, who reside in New York City. A son, Steven, died in 1987.

up with the changing media industry. He and Helen met in Minneapolis, where she was a buyer at Dayton’s department store. For many years they vacationed at their lakeside cottage in northern Wisconsin. From 1991 to 2007 they often lived on nearby Little Ripley Island, which Jim bought in 1990. (He said two of his whims in life had worked out: owning an island and a 1966 Volkswagen Beetle.)

Among his newspaper reporter anecdotes, Jim recalled short interviews with President Harry Truman and Presidential candidate Dwight Eisenhower. When Jim was a college newspaper reporter in Missoula, MT, in 1948, Truman gave him three minutes on his train’s observation car after a campaign speech in his race against Thomas Dewey. In 1952 in Minneapolis, candidate Ike took Jim’s questions during a hotel elevator ride.

At the time of his death, Jim lived in a cottage at Crane’s Mill, a retirement center in West Caldwell, NJ.

A memorial service will be held at Community Congregational Church, 200 Hartshorn Drive, Short Hills, NJ on Thursday, May 19th at 11:00am.

In lieu of flowers, donations in memory of Mr. Soderlind may be made to Northwoods Wildlife Center, 8683 Blumenstein Rd., Minocqua, WI  54548

Funeral Home:
Bradley, Smith & Smith Funeral Home Funeral:
A memorial service will be held at Community Congregational Church, 200 Hartshorn Drive, Short Hills, NJ on Thursday, May 19, 2022 at 11:00am. Memorial Gifts:
In lieu of flowers, donations in memory of Mr. Soderlind may be made to Northwoods Wildlife Center, 8683 Blumenstein Rd., Minocqua, WI  54548