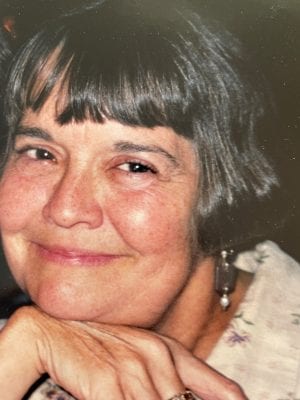 Terry Kidner of Madison, NJ died peacefully on July 3rd, holding hands with her partner Phil.  She will be remembered by her friends and family as an unfailing correspondent. Until the week she passed, she handwrote letters to her dear friends and granddaughters (who received at least one piece of mail a week for the last nine years).

Terry was a woman of words and wit. She loved the English language with a passion few others possess. She earned her Ph.D. in English literature from Bryn Mawr University, writing her dissertation on John Milton’s Paradise Lost. She went on to teach at Salem State College in Massachusetts and Kent Place School in Summit, NJ, where she inspired students and formed lasting relationships that continued to her final days. Retired from teaching, she spoke at conferences far and wide, delivering papers on subjects as varied as Oscar Wilde and the television show Deadwood. She had an impossibly good memory and could quote from nearly any poem in one of her many many books. That memory had served her well earlier in life as a College Bowl champion for Colorado College.

She had many passions, including horseback riding, communing with nature, bird watching, and above all reading. Inspired by her childhood in post-war Japan and Germany, Terry was an intrepid traveler, who hiked the Alps, explored the tidal pools of Maine, sea kayaked in New Zealand, and was known to buy a last minute ticket to London to see a play.

She will be sorely missed by anyone who had the good fortune to know her and especially by those of us on her mailing list.

Funeral Home:
Wm. A. Bradley & Son Funeral Home Funeral:
A memorial service/celebration of life will be held on Saturday, July 17, 2021 at 2:00 pm at William A. Bradley & Son Funeral Home located at 345 Main Street in Chatham. Immediately following the memorial service there will be a reception at the funeral home- all are welcome. Memorial Gifts:
In lieu of flowers, the family has asked for donations to be made to The Morristown Medical Center ICU.