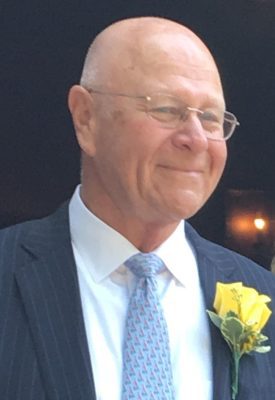 Theodore R. Walter, Jr. “Ted” aka “Poppy”, 82, of Morristown, formerly of Madison, passed away on October 21, 2022.  Born and raised in Newark, the son of Theodore, Sr., and Evelyn (Grayson) Walter, Ted graduated from Pingry High School in Bernard’s Township where he was captain of the golf team.  He received his Bachelor’s Degree in Business from Babson College in Wellesley, MA.  Upon his graduation, Ted joined the family business, Theodore Walter Rockaway Tank, Inc in Dover, NJ.  He later joined Gogel Limousine Service in East Hanover and retired after 30 years of service.  In his earlier years, Ted coached Little League in Madison.  He was a member of the Lake Hopatcong Yacht Club, the Madison Jaycees and the Pingry Alumni Association where he is a member of the Hall of Fame for golf.  Ted loved spending time and boating at the family’s summer home on Lake Hopatcong.  He was especially proud of his grandchildren and enjoyed attending their sporting events in both high school and college.

A funeral service at Wm. A. Bradley & Son Funeral Home, 345 Main St. in Chatham will be held on Saturday, October 29th at 9:30am.  Interment will follow at Restland Memorial Park in East Hanover.  Visiting hours will be on Friday, October 28th from 4 to 8pm.