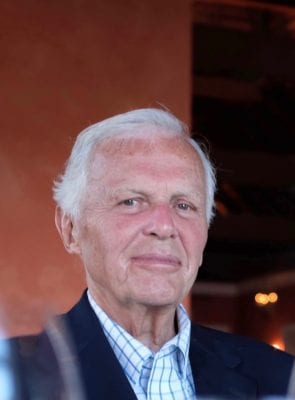 Thomas Bray Wilcock, formerly of Short Hills, NJ, passed away peacefully on Thursday, December 31, 2020. He was 87 years old.  Born in Dayton, Ohio to Forrest Eugene Wilcock and Helen Bray Wilcock, Tom graduated from Fairview High School in Dayton, where he excelled in athletics, captaining the football, basketball and baseball teams his senior year.  He also had a tryout with the Cleveland Indians during his senior baseball season. Upon graduation from high school, he attended the University of Wisconsin at Madison and played on the football team his first two years at school.  After graduation he began work for National Cash Register and met his future wife Violet Dunning in Chicago. They married in Denver on June 2, 1956.

Tom was drafted into the Army in 1956, spending most of the time stationed in Stuttgart, Germany. After being discharged and then moving several times, Tom and Vi eventually settled in Short Hills in 1965, where they raised four beautiful children. He spent his entire professional career as an independent manufacturers representative, mainly focused on sporting goods. As principal of Tom Wilcock & Son, Inc, he was a longtime representative for Cooper hockey equipment and Wigwam Mills, makers of sporting knitwear.  His love of sports was forever in his life, and the University of Wisconsin Badgers were always at the top of the list.

Tom lived life to the fullest and was known for his quick wit, infectious smile and engaging personality. He will also be remembered for his extensive commitment to youth sports, which included coaching the Millburn Chiefs football team for nearly 30 years. He always spoke fondly of meeting former players and reminiscing about those playing days.  He also nurtured countless friendships as a longtime member of Canoe Brook Country Club and The Wintergreen Club.

Tom introduced his family to skiing and soon established a presence at Windham Mountain in New York, where the family has spent over 50 winters, being together and making memories. Above all, Tom loved spending time with his children and grandchildren. “JJ” was forever known for his inquisitive nature and desire to get to know people. Anyone interested in a serious relationship with any of his children or grandchildren eventually had to face the music and experience his interested and thorough questioning.

Tom was predeceased by his parents Forrest and Helen Wilcock, his twin sister Judy Eveslage and his loving wife of 58 years, Violet. Tom leaves behind his four children, Suzanne Segalas and her husband Donnell of New Vernon, NJ; Patricia Schram and her husband Stephen of Darien, CT; Thomas B. Wilcock Jr. and his wife Laura of Darien, CT; and daughter Peggy Gano of Mendham, NJ; and nine beloved grandchildren: Alexandra, Madeline, Parker, Bray, Paige, Caitlin, Catherine, Meredith and Billy.

In remembrance of Tom’s life and in lieu of flowers, the family asks that donations be made in Tom’s name to either The Gagnon Cardiovascular Institute at Morristown Medical Center or The University of Wisconsin Athletics Program and select the Student Athlete Support Fund – 112130056.  A private service will be held on January 9th and the family plans to celebrate Tom’s life later in the year when gathering restrictions are lifted.

Funeral Home:
Wm. A. Bradley & Son Funeral Home Funeral:
A private service will be held on January 9th and the family plans to celebrate Tom's life later in the year when gathering restrictions are lifted. Committal:
Private Memorial Gifts:
In remembrance of Tom's life and in lieu of flowers, the family asks that donations be made in Tom's name to either The Gagnon Cardiovascular Institute at Morristown Medical Center or The University of Wisconsin Athletics Program and select the Student Athlete Support Fund - 112130056.