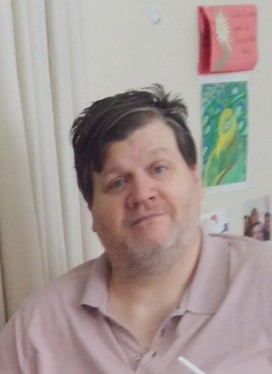 Tom was just such a big, lovable guy. People loved Tom and his big heart loved back: folks close to him, the friends he easily made, music, the theater, cooking. He was a talented artist and an avid fisherman too.

Tom was also a hard worker and an even better baker, but it was on his way to work the midnight shift at his baking job in October 1995 when he was rear ended by a drunk driver, leaving him paralyzed and leading ultimately to his recent untimely death.

Despite his handicap, he returned to school and got a degree from Seton Hall University. His natural concern for others plus his own experiences led him to a job teaching children with severe learning disabilities. As a younger man he already did a lot of volunteer work with the handicapped.

It wasn’t the first time that life had thrown Tom a curve ball. A few years earlier, when his father died at age 54 of cancer, Tom put the pursuit of his art degree on hold in order to help his family.

Even folks close to him might not remember that Tom had had a previous debilitating car accident, one that left him unable to walk for over a year. That crash happened while Tom was helping a friend move house.

After a long recovery he moved to upstate NY and found satisfying work as a line cook in an upscale restaurant. He certainly enjoyed the fishing up there.

Tom always considered NJ his home but as a child he lived in California for 2 years and spent many family vacations in the Vermont countryside. Before his accident he traveled to Ireland and Japan.

The creative interest in art was always a part of Tom. There were Lego creatures, papier-mâché’ heads for elementary school concerts, scenery design in high school and drawing on any scrap of paper nearby. In 2007, he became an active participant in the Arts Unbound program, returning to his true calling, art. Here he grew his art as a student, instructor and a commissioned artist. In 2010, Tom was asked to create the art for Monarch Housing Associates 20th Anniversary celebration program. He was called upon again in 2013 to design the Mike Lione Accessibility Award to be presented by Community Health Law Project. He never boasted about these honors but his art fans valued his talents

Fun fact: Tom used to drive an awesome 1968 Thunderbird with a 429 motor. Mint condition, stock and metallic green. He also spent all his earnings from the handmade ceramic tile mill putting gas into it.

Both of Tom’s parents were taken from him at too young an age but he is survived by sisters, Barbara and Elizabeth, a brother Owen, sister in law Mineko, and niece Fiona. (Sadly he never got to meet his young niece due to the pandemic.) And his/our very special friend Donna.

Everyone knows that daily life with paralysis isn’t easy. But there are unseen struggles too. Illness, therapy, mental anguish. Tom’s body bears the scars of numerous operations. He managed it with warmth and humor, always becoming good friends with the people at the hospital who took care of him.

Throughout his life Tom overcame many obstacles better than most of us could have. It was indeed unfair but he never once said so. In that quiet, gentle way, he was a hero. He is gone but I hope we can learn to be a little more like him.

His hearty laugh and big bear hugs will be missed. So much.