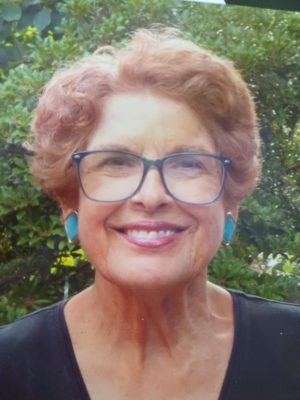 She was born in St. Mary’s, Pennsylvania, daughter of the late Bill and Vivian (Loncoske) Lowther, and sister of Carolyn Lowther. The elder of the two sisters, Vicky grew up around New Jersey and Pennsylvania, due to Bill’s career as a principal and superintendent of schools in the area. After graduating from Glassboro High School, Vicky attended Vassar College (‘65) in Poughkeepsie, NY, where she was very involved in clubs and activities on campus and made some of her nearest and dearest lifelong friends.

After graduation, Vicky moved to New Orleans and New York City where she worked in advertising before getting her Masters in Education at the University of Pennsylvania. While in school in Philadelphia, Vicky was roommates with her sister, Carolyn, who was also studying business there at Wharton. Upon finishing her Masters Degree, Vicky joined the “family business” (in addition to Bill’s career in education, her mother Vivian was a foreign language teacher) and began teaching at Morristown High School in Morristown, New Jersey where she taught until she retired in 2002.

In 1970, while on a trip to Europe through an education organization, Vicky met Ken Willson, who was on the same trip with his sister, Jane, also an educator. On December 23, 1972 Vicky and Ken married in Boonton, NJ, and after an 18-month stint living in Parsippany, they moved to Morristown, where Vicky lived the rest of her life, and where Ken still resides. There is little question that over the 32 years of living in Morristown and teaching at Morristown High School, Vicky became virtually a Morristown institution. Professionally, she started out as the only female in the history department, but soon began teaching sophomore English, which she did for the vast majority of her career. In 1989, Vicky was the Morris County Teacher of the Year. A perennial student favorite, she was a volunteer faculty advisor for multiple clubs and activities, (often at students’ request), including the Morristown Environmental Activist Coalition, of which her daughter Kate was an officer while she attended the high school. (Incidentally, Vicky was also Kate’s English teacher while Kate was attending Morristown High School and heavily involved with music and theater at MHS!). During a number of summers, Vicky continued her post-graduate education through a program with Lincoln Center, which played perfectly into her love of the arts and continuing education.

Vicky was also extremely involved with the Morristown Presbyterian Church, where amongst other committees and obligations, she was the Chair of the Nursery School (which Kate also attended when she was that age). Vicky was also a member of the women’s organization PEO, worked tirelessly with what was formerly known as the soup kitchen, now Nourish NJ.

When she wasn’t constantly volunteering her time, particularly after her retirement in 2002, she could be found around town, shopping at Kings, or Just Jersey and most often running into former students. She loved throwing parties and gatherings, going into Manhattan for Broadway productions or to see concerts at Lincoln Center, meeting with her beloved book club, and traveling anywhere she might find beautiful mountains and water.

Vicky is survived by her husband of nearly 50 years, Ken Willson, her daughter Kate Willson, who lives in Los Angeles, and her sister Carolyn Lowther who splits her time between New Jersey and Arizona. She was also a devoted dog-grandma to Peppermint and Honey.