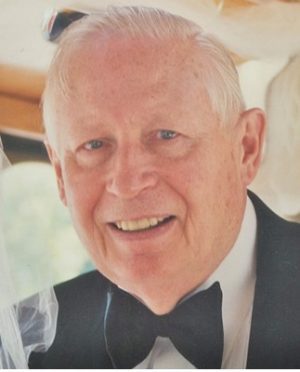 Wallace E. Shrekgast, 89, of Montvale, NJ passed away peacefully on December 1, 2021.  Visiting hours at Wm. A. Bradley & Son Funeral Home, 345 Main St. in Chatham will be on Friday, December 3 from 5pm to 9pm and on Saturday, December 4 from 9am to 10:30am prior to a Mass of Christian Burial at St. Patrick Church, 85 Washington Ave. in Chatham, NJ at 11am. Interment at George Washington Memorial Park in Paramus, NJ will follow.

Wally was born and raised in Jersey City, NJ, the eldest of the four sons of Wallace and Margaret (Fries) Shrekgast. There, he graduated from St. Aloysius High School. He cherished his memories of growing up in Jersey City, and the friendships he made there that filled eight decades with laughter and fun. Wally went on to earn his Bachelor’s Degree in Accounting from St. Peter’s College, and subsequently served his country as a 1st Lieutenant in the U.S. Army Chemical Corps from 1954 to 1956. He began his distinguished career at the New York office of Peat Marwick (now KPMG) as a Certified Public Accountant in 1956.

Wally married his beloved Irene Pryslak while working at KPMG.  Together, they had three children, Ann, Marie, and Michael. The family lived in East Brunswick, NJ and later moved to Montvale, where Wally became a fixture as a volunteer parishioner for Our Lady of Mercy Academy in Park Ridge, NJ where the children attended school. A devout Catholic, Wally served on the school board, sports committee, and the endowment board, and was a basketball coach for Michael. Wally loved to share stories about Greenbriar Lane and the dynamic neighborhood where he raised his children, especially the epic Christmas light displays that drew visitors and news channels from all over Bergen County.

While working at KPMG and raising a family, Wally earned his Master’s Degree in Taxation from Pace University. Wally was a “jack of all trades” and master of many. He was invited into the partnership at KPMG in 1972 and during his 29 year career at the firm advised some of the country’s largest corporations, nonprofit organizations, and business leaders on complex tax and estate planning issues. He helped establish the first of the Firm’s tax and financial planning programs at Citicorp and contributed greatly to the growth of the financial planning practice. He was often quoted in industry publications and asked to present as an expert at industry conferences. He was a member of the Estate Planning Council of NYC, Estate Planning Committee of St. Peter’s College and the Charitable Giving Council of Pace University. He retired from the firm in 1985 to spend time with his children after the passing of his wife, Irene.  In the years after his retirement from KPMG, Wally ran his own firm, and he served as a trusted advisor to many business leaders and former colleagues on tax and estate issues. Wally loved the challenge of the work he did throughout his career, developing and passing on his knowledge to staff, and forged lasting friendships with his clients.

Wally had a wide range of interests, hobbies, and talents.  He was a life-long golfer, having learned the game while in the Army, and belonged to the Rockland Country Club in New York. He was an avid reader and news aficionado. An established night owl, Wally loved to stay up with his children and watch local news. Wally was also a talented craftsman who designed and built additions onto his homes in Montvale, NJ and Bushkill, PA. He loved to travel, and he and Irene crisscrossed the world together before they had children. Wally was never happier than when he was relaxing with his family and friends at the Jersey Shore, Hilton Head Island, or his house in the Poconos. He loved a good diner, Villanova basketball with his daughters, and Notre Dame football with his son.  Wally could often be heard listening to Frank Sinatra, Bruce Springsteen or Kenny Rogers at home or in the car. He was a dog guy, and was seldom seen without one of his dear, vocal Shetland Sheepdogs.

Wally was a dedicated father, brother, son, uncle, and friend. He was the best conversationalist you could meet. He was interested in any topic, particularly if it was new to him. He could see the good in anyone, and anyone who spoke to him walked away feeling a little more special than they had before. He was supremely humble, and unwaveringly generous.  He quietly supported his church and countless charitable organizations.

In lieu of flowers, donations in Wally’s memory may be made to either the ASPCA at  http://www.aspca.org/ or Wounded Warrior Project at https://www.woundedwarriorproject.org/