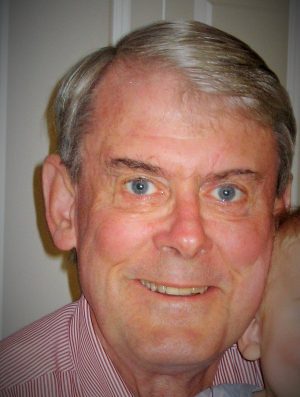 “Bill” was born and raised in Des Moines, IA, by the late William Addison and Mary Louise (nee Heil) Bennett. He is predeceased by his brother, Robert Bennett.  Bill graduated from Theodore Roosevelt High School in 1956 (where he proudly recalled serving as head lunchroom monitor for all four years!). He received a BS in Engineering from Stanford University, serving as President of Chi Psi Fraternity, in 1960. He then joined the United States Navy and was deployed to the Seventh Fleet in Yokosuka, Japan, aboard the USS Coral Sea for two years. From 1963-1964 he served as an Operations Instructor at the Officer Candidate School in Newport, RI. He was discharged as a Lieutenant and entered the US Naval Reserves in 1964.  Stanford and the US Navy introduced Bill to lifelong friendships and world travel, both of which were his greatest passions for many decades.

Bill’s career spanned from California to New York, starting as a Sales Representative for the Xerox Corporation in Palo Alto, CA. Struck with a desire to work in Manhattan, Bill moved east and joined the International Lending group at Bank of America in 1966. He went on to work in Equity Research at Clark Dodge, Commodity Sales at Merrill Lynch, Institutional Equity at Donaldson, Lufkin, & Jenrette, Inc., as a Mutual Fund Wholesaler at Alliance Capital Management, and in Marketing at Brave Asset Management, Inc. During his career, Bill earned an MBA from the NYU Stern School of Business in 1975.

In 1965 Bill married Joan McBain. Together they moved from California to New York, ultimately settling in Summit, NJ, where they raised their children Elizabeth (Betsy) McBain Bennett and William (Billy) Addison Bennett III, along with three golden retrievers who brought Bill both joy and frustration.

Bill loved to travel, both internationally and domestically. He undertook over fifteen cross-country road trips, never following the same path twice. He rode several extended bicycle tours in both Iowa and Oregon. He proudly led Team Summit in the RAGBRAI bicycle ride across Iowa for almost thirty years, an annual ritual that he cherished. His and Joan’s travels included trips to Alaska, Australia, New Zealand, China, South America, southern Africa, Morocco, Cuba, and every nook and cranny of Europe. Along the way, Bill formed friendships with everyone he encountered. He was uniquely known for his habit of maintaining friendships not only with the individuals he met, but also with their extended families and friends who resided in destinations Bill would visit during subsequent travels. In advance of any trip, Bill would research local cuisine, trendy hotels, and popular cultural events, arriving ready to explore.

Bill was actively involved in the Summit community, volunteering at Calvary Episcopal Church, the American Red Cross, and Overlook Hospital. In his spare time he enjoyed going to the movies, doing crossword puzzles, and collecting new-fangled gadgets that he never used. He especially enjoyed researching and keeping up with happenings in his beloved New York City, where he and Joan often went to enjoy a new restaurant, museum, or show. He had a collection of colorful watches that he diligently matched to his outfits. He maintained an extensive assortment of ties, with patterns for every holiday. He was known for his style, his colorful attire, his favorite drink – martini, straight up with an olive – his provocative jokes, and his ability to deliver perfectly crafted one liners. Since his passing, his devoted fans have recalled him as a “legend.”

Bill is lovingly remembered by his wife Joan and their children and their spouses: Billy and Bevin Bennett (Jack and Will) of Baltimore, MD, and Betsy Bennett and Oliver Weir (Graham, Ash, and Noel) of Corte Madera, CA. Bill was particularly fond of his grandchildren and will be greatly missed by them.

Funeral Home:
Bradley, Brough & Dangler Funeral Home Funeral:
A private service will be planned at a later date Memorial Gifts:
In lieu of flowers, donations can be made to the Summit Volunteer First Aid Squad (www.summitems.org or PO Box 234, Summit, NJ 07902), whose services Bill greatly appreciated.