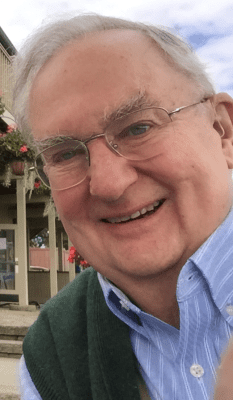 William Blair Birdsall, of Chatham, NJ, was born on August 6, 1940 and died on October 4, 2022, in Morristown, NJ.  He was raised near the then small, quiet Delaware River town of Yardley, Pennsylvania.  Though plagued by allergies and illnesses, Bill thrived with the support of his loving sister and brother, Bette and Jim, and his caring mother, Helen, who always gave of herself for the benefit of her children.

As a youth, “Bill” loved exploring the area on his bicycle and spent all too brief a time at his grandmother’s farm in Ulster County, New York.  In later years, he came to believe in the old saying, “You can take the boy out of the country, but you can’t take the country out of the boy.”

Bill graduated high school in 1958 from the Solebury School in New Hope, PA and earned a B.S. degree in Finance from Lehigh University (1962), a Master’s degree in Accounting from Rutgers University (1965) and became a licensed CPA.  These studies led to careers at the Federal Reserve Bank of New York, Price Waterhouse & Co. and the New York Life Insurance Company, where he rose to serve as Vice President in the Investment Department.

While working in Philadelphia, Bill met, fell in love with and married (1966) Marge Willis.  It was with Marge that Bill came into the fullness of his life.  Together, they went picnicking, strolling through arboretums and gardens, saw concerts, camped and dined at favorites spots.  After living an idyllic two years as tenants in an old farmhouse on 50 acres, Bill and Marge put roots down in Chatham, New Jersey in 1969 and were ultimately considered “old-timers” in the historic town.

Over the following years, they welcomed their three wonderful children, Jon, Lyn and Jim; and eventually, eight grandchildren.

At one time or another, Bill found himself on business in 34 states, Canada and Belgium, and in such unlikely places as the site of a huge communications antenna in Talkeetna, Alaska; in a cotton spinning plant in Texas; on top of a molasses storage tank at a distillery; and inside the hold of a large LNG container ship.

Bill eventually left the excitement of the world of business to lend his experience and leadership to many areas of the United Methodist Church at the local and the Annual Conference levels; he also served as President of the Chatham Interfaith Council, as youth soccer coach; as Cubmaster in Pack 24 Cub Scouts; Assistant Scoutmaster in Boy Scout Troop 121; and on the Board of the Pastoral Chaplaincy of the St. Barnabas Hospital.

Bill enjoyed reading aloud to his kids, playing family card games, giving his car a tune-up (before the cars became dependent on electronics), sailing on Lake George with the family, sketching in pencil, cooking special meals, hiking with Marge on the trails at the Lake Mohonk Mountain House, doing puzzles, studying family history and writing (“A Firm Foundation: Tales of a Cornerstone and of a People” 273 p.).  He was an avid student and reader of world history and the family historian.

He never forgot the pleasure of sitting as a boy outside of his grandmother’s farmhouse in the evenings and watching the peaceful dairy cows grazing in the pasture.

Memorial gifts can be made in Bill’s name to The United Methodist Home for Children & Youth in Macon Georgia (https://www.themethodisthome.org), or your favorite charity.

Funeral:
A Memorial Service at Chatham United Methodist Church, 460 Main St. in Chatham will be held on Saturday, October 22, 2022 at 2:00pm Memorial Gifts:
Memorial gifts can be made in Bill's name to The United Methodist Home for Children & Youth in Macon Georgia,(https://www.themethodisthome.org), or your favorite charity.