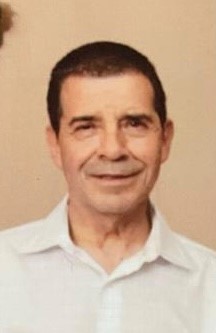 Camilo was born on June 4, 1955 in Armenia, Colombia and was the son of Camilo and Cecilia (nee Arbelaez) Kiernan. He immigrated to the United States 40 years ago.

He was an avid soccer fan and spent most of his time outdoors enjoying his garden and plants. Camilo liked reading, playing parcheesi, watching a good movie and spending time with his beloved family. He was also an animal lover.

Camilo is survived by his wife, Nelly P. Restrepo Herrera and was the loving father of Mauricio Herrera (Brenda), Pamela Campos (Michael), and Alejandro Herrera. He was the cherished grandfather of Michael Campos, Jr., Annabelle Herrera, Skylar Campos, Isais Herrera, Mauricio Herrera, Jr., Elanie Herrera. In addition, he is survived by a sister, Gloria Herrera and nephews; David Sepulveda and Andres Sepulveda.