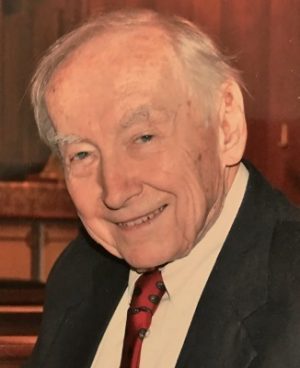 Born in New York City, the son of John and Frances (Diegel) Knoeller, he was raised in Brooklyn and Queens.  After serving in the U.S. Army Air Corps during WWII, he moved to Wantagh, New York with his young family, before relocating in Berkeley Heights in 1966.

Chris had a long and distinguished career with Oakite Products Inc. of Berkeley Heights, rising steadily through the executive ranks to assume the position Treasurer before ultimately being named First Vice President for Finance.  In that capacity, he was noted as a compelling public speaker and eloquent writer as well as a master of financial analysis.  His many contributions included overseeing a program of acquisitions that dramatically increased the reach of the corporation in the U.S. and abroad.

Chris was a devout man who throughout his adult life participated actively in the life of several congregations of different denominations.  He was baptized and confirmed at St. George’s Episcopal Church in Manhattan. In Wantagh, he taught Sunday School at Christ Lutheran Church and later served as Superintendent.  After moving to New Jersey, he served as co-superintendent at Faith Lutheran Church in New Providence.  He also served as a member of the Vestry for many years at St. Paul’s Episcopal Church in Chatham. He is perhaps best remembered as the congregation’s photographer, chronicling major church events as well as taking an astonishing number of candid portraits of families attending there.

Chris loved literature and learning.  Following retirement, he became involved for several decades with Leisure Learning sponsored by the Bernards Township Library in Basking Ridge, a popular series of lectures by college faculty geared for a general audience of seniors.  He personally coordinated programs in literature and history: recruiting faculty, determining themes, and introducing speakers. Once again he generously offered his services as photographer.

Chris was the beloved husband of 65 years to the late Ruth Knoeller.  He was the loving father of Christian P. Knoeller and his wife Julie Ann as well as Carol (Knoeller) Corcoran and her husband Gene.  He is also survived by his cherished grandchildren, Patrick Canaan, Annie McNutt and her husband Jeff, and great granddaughter, Kenna McMindes, as well as many loving relatives.