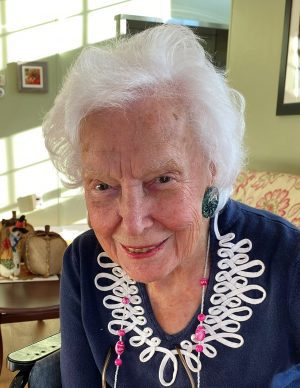 Christine Giger Egner passed away peacefully at age 101 on July 2, in Chatham NJ.

Witty, kind, cheerful and loving to the end, she was a role model for the power of optimism and spreading joy.  We considered her our very own Sunshine Chairman.

Chris grew up in Elizabeth NJ and graduated from Katherine Gibbs School in NYC.  She was a lifelong music lover, who played piano, and had a wonderful voice, performing the role of Peggy in Pirates of Penzance in high school right through singing in church choirs well into her 90’s.  She adored jazz and live music and theater of all varieties.

Christine married George Giger in 1944 and they raised their family of daughters in Bergen County before moving to the Jersey shore in 1959.   There, they enjoyed the beach, boating, water skiing, and biking on the boardwalk.  George owned Giger Ford in Belmar and died in 1979. Chris lived in Spring Lake Heights until 1989, when she married longtime family friend Robert Egner after he was widowed and moved to his home in Hillsdale.  She had 27 happy years there, expanding her heart to include Bob’s family and many new friends.  After Bob died, she moved to Juniper Village and then Garden Terrace in Chatham, close to her daughter Carla.

Chris was an upbeat, enthusiastic and openhearted person.  She made her homes welcoming to extended family and her daughters’ friends, many of whom remember her graciousness even now. Tall and beautiful, she was a sharp dresser with a keen sense of humor who was also modest, never seeking the limelight.

She was game to try anything, from skiing to international travel, exotic foods, and fiercely competitive laughter filled card games of fighting solitaire.  She played golf and bridge at both Spring Lake Golf Club and Ridgewood Country Club, still on the links into her 90’s.

Christine set a tone of respect, acceptance and kindness for all.  When asked what she wanted to be remembered for, she quipped “she was fun”.  Which she was.  She also gave her family this playful advice “Be careful of tigers”.

The love she gave, and the lessons she taught, remain with us forever.