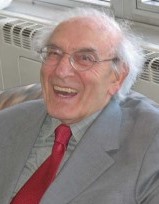 Dr. Albert Bernard Hakim, 101, of Summit, NJ, passed away peacefully at his home on August 26, 2021. A funeral mass will be held at the Church of St. Teresa of Avila in Summit on Friday September 3rd at 9:30am. Interment will follow at Holy Cross Cemetery in North Arlington, NJ. Friends and family are invited to visit at Bradley, Brough and Dangler Funeral Home, 299 Morris Ave. in Summit on Thursday September 2nd from 2pm – 4pm and 6pm – 8pm.  Because of COVID 19, the family has requested that all guests wear a mask.

Born and raised in Kearny, NJ, the son of Riskala and Suesli (Saachi) Hakim, Dr. Hakim was a longtime resident of Summit. He earned his Ph. D in Philosophy from the University of Ottawa and his J.D (Hon.) from Seton Hall University, to which he devoted the majority of his life, as a student, priest, Professor of Philosophy, Chair of the Philosophy Department, and Dean of the College of Arts and Sciences.

A man of deep faith, he had an enduring love of family, community, music and the great outdoors, a playful sense of humor, and a lifelong quest for knowledge and love of learning. Every conversation with him was a special one. He connected with and listened to everyone of all ages, providing insight, advice, wit and wisdom, bringing out the best in all with whom he spent time. He touched the lives of countless numbers of people; all are honored to have been among them.

Albert was born in 1919, in Kearny, New Jersey, to Riskala and Suesli Hakim, Chaldean Christians, who came to the United States in 1912 from Aleppo, Syria by way of Diyarbakir, Turkey, and Alexandria, Egypt. In New Jersey, Albert’s father owned a dry cleaning business, and passed away when Albert was 2 years old. He and Suesli had six children – Paul, Sophie, Florence, Margaret, Albert, and Robert. Albert enjoyed playing around town with Robert, playing football and baseball in the town leagues. As a teenager, he worked for a local grocery delivering coffee and tea, driving a Ford Model T. It was on this route that he met a student studying at Seton Hall, who told him to go into the admissions office and ask about becoming a student himself. In 1937, Al walked onto campus and spoke casually with a priest about being admitted, and the next thing he knew, was a student. A 2008 feature in The Servant Leader, a SHU publication, noted that, then in Seton Hall’s 152 year history, Albert “has been witness to almost half of it.”

Albert took a keen interest in theology and science, and became a teacher of chemistry at Seton Hall Prep, and in 1950 became a full-time faculty member of the college. By then, he was a priest, serving the Seton Hall community and as an auxiliary priest at St Michael’s in Union, NJ.

He completed his PhD in 1954, at the University of Ottawa, with a dissertation on Pre-Socratic Philosophy. He chaired the Philosophy Department, and in 1961 became the Dean of the College of Arts and Sciences, and served there until 1973. He founded the Center for Humanistic Studies, attracting several renowned scholars to the faculty, like Stanley L. Jaki. In 1990 Dr. Hakim became Professor Emeritus, and helped found the Center for College Teaching. He wrote two widely used texts, Historical Introduction to Philosophy, and Understanding Morality, and wrote for Commonweal and other journals. He was influential in building a sense of community among the students and faculty, and produced the Sabbatical Panorama and inspiring thoughtful dialogue. Seton Hall has honored this service with the Albert B. Hakim Faculty Service Medal “To acknowledge, celebrate and commemorate the exemplary and extraordinary [years] of Albert B. Hakim’s dedication and service to Seton Hall University as professor, dean, colleague and friend. This honor shall be bestowed upon a full-time South Orange faculty member for giving copiously of her or his time, energy, and personal gifts to advance the status and interests of the faculty and, thereby, the academic mission of the University.”

In 1976, Albert married Irene Fraser, of New Zealand, and started the chapter of his life as husband and father. The story goes: in 1972, Albert was on sabbatical leave in Tübingen, Germany. Irene was studying 19th Century German Literature there too. In a philosophy class at the university, Albert and Irene met. Albert, impressed by Irene’s intelligence, asked her to a Bach concert at a local church, and the rest, as they say, is history. In 1977, Albert and Irene became the proud parents of Michael, in 1978, William and in 1979, Katherine. To grow up with Albert, who dedicated his life to divine wisdom, to probing theological questions, infuse in daily life his loving spirit, and dedication, and love of life, as a father and husband, was a blessing. At the wedding of Michael and Katherine Meyers, he said, love is not only an overarching, all-embracing force, but is also found “in the pots and pans of daily life.”

In lieu of flowers, donations in Dr. Hakim’s memory may be made to Maryknoll Catholic Foreign Mission Society of America, Overlook Hospital Auxiliary, Doctors Without Borders, St. Jude Children’s Hospital, North Shore Animal League, UNICEF, and Save the Music Foundation.

“The final happiness of man then will be in the knowledge of God, which the human soul has after this life according to the manner in which pure spirits know Him. Therefore the Lord promises us reward in heaven (Matt, v. 12), and says that the saints shall be as the angels (Matt, xxii, 30), who see the face of God in heaven (Matt, xviii, 10).” – from Dr. Hakim’s Understanding Morality.