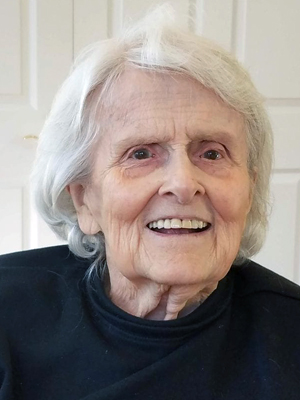 Elizabeth (Bette) Galliers Mell died peacefully May 25, 2020. Born and raised in Toledo, OH, she moved to Summit, NJ, and spent her last year at Garden Terrace Nursing Home in Chatham, NJ. Mrs. Mell graduated from Thomas A. DeVillbis High School, Toledo, OH, in 1944 and then graduated as a proud Tri Delt from the University of Toledo in 1947 with a Bachelor’s degree in Spanish. In 1994, Mrs. Mell received her Master of Arts in Teaching from Fairleigh Dickinson University.

Mrs. Mell moved to Summit with her family in 1960 and quickly became involved with local organizations such as the Summit Public Library, becoming President of the Board, as well as Calvary Episcopal Church, where she was an invaluable volunteer with the Women of Calvary, the Village Exchange, and the Vestry.

In addition to her years of volunteer service to the community, Mrs. Mell was a highly-respected educator in Summit, with 13 years at the Kent Place School teaching math, computers, and Spanish, and over 25 years at Brayton Elementary School teaching ESL, math, and computers.

Mrs. Mell will be joining her husband of 63 years in a private interment in the Garden of Resurrection, Calvary Episcopal Church, Summit.  Mrs. Mell’s final years were met with love and kindness from SAGE Eldercare in Summit and from the Garden Terrace Nursing Home in Chatham.

Funeral Home:
Wm. A. Bradley & Son Funeral Home Memorial Gifts:
In lieu of flowers, the family would be pleased if you would honor Mrs. Mell by making a gift to SAGE Eldercare Spend-a-Day, 290 Broad St., Summit, NJ 07901.