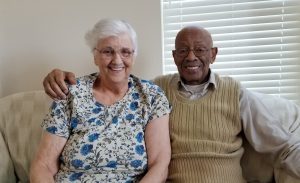 Irma Schemitsch was born in the Gottschee region of the former Yugoslavia on October 3, 1940, to Josef Schemitsch and Maria Yaklitsch. She was the second of their 5 children, all of whom but one have predeceased her: her older brother Hubert, her middle sister Traudi, and her baby sister Maria. They are all survived by their youngest brother Josef of Klagenfurt, Austria.

Irma was a very dutiful child and very studious. Her family, forced to flee their ancestral homeland, remained tight and close through many challenges. Irma survived a near deadly case of spinal meningitis and coma at the age of six. And despite that illness and injury that trapped her in an upper body cast, she grew into a beautiful, statuesque young lady. Irma always worked hard and loved being a good daughter and protective big sister. Not one to reminisce much, Irma did share rare experiences of good times in her youth including being quite a good polka dancer. She, emigrated to the United States at the age of 19, joining cousins in New York.  Here in the States, she studied fashion and interior design before going to work as a governess for television talent scout Buddy Page.  She worked with and helped raise Page’s two children Pat and Jody who still consider Irma a strong mother figure.

After helping to raise Jody and Pat, Irma went to work for National Starch and Chemical Corporation in Plainfield, New Jersey. From that job experience some of her long-term friendships still remain. Without question the most important relationship she developed at National was the bond she had with a successful chemist, Mr. Benjamin Douglass Jubilee, Jr. A widower eleven years her senior with three children, Benjamin came into Irma’s life with life experiences and cultural differences that challenged the couple.  But despite those differences, Ben and Irma fell deeply in love. They married on August 15, 1970.  Irma married into a readymade family and was fulltime mother to Benjamin’s 3 children Glenn, Jane and Lisa. Irma never had children of her own, and proudly claimed Glenn, Jane and Lisa as her own with love and pride that only intensified through life. Irma enjoyed gardening, shopping garage sales and keeping a beautiful home.  She always worked hard, stretched every dollar and kept strict rules in place to hold the family together. In 1995, after Ben had retired from National Starch and the children were all grown, Ben and Irma left their home in Basking Ridge and built a house in Whitehouse Station, New Jersey. They loved that house. Irma had always dreamed of having a home that she and Ben had to themselves from scratch, and the house on 22 Abraham Road was that dream come true. Irma and Ben flourished in that home for 24 years before transitioning to assisted living in 2019. Ben and Irma worked at and enjoyed 51 years of marriage. They were dedicated to each other beyond measure.  Every neighbor and every friend referred to Ben-and-Irma as one sweet happy couple that were always so nice and made everyone smile. Irma loved her husband so much. The challenges of old age would not separate them as Irma sacrificed her own health to watch over and protect Ben night and day. It exhausted her body, but not her spirit. It was her purpose in life to love her husband. She was always so giving. Irma always put the needs of others before her own. Irma gave of herself despite herself. She loved, and she gave.

On the morning of December 29, 2021, Irma was released from her earthly vessel and entered into eternal peace and rest. She entered into a much-deserved rest joining her parents Josef and Maria, her sisters Traudi and Maria, and her brother Hubert. She is survived by her youngest brother Josef Schemitsch and his wife Heidi, her husband of 51 years Mr. Benjamin D. Jubilee, Jr. and his 3 children Glenn Douglass (and his wife Rose) Jane Myra and Lisa Ann (and her husband Andrew). She is also survived by dozens of nieces, nephews and cousins here in the United States and in Europe. Left behind to mourn, remember and honor her are countless friends and colleagues who treasure memories of her sweet generous nature and sunny smile.

Funeral Home:
Bradley, Brough & Dangler Funeral Home Funeral:
Due to COVID restrictions and other circumstances, we will postpone a memorial service to the Spring, at which time we are hoping everyone will be able to attend.