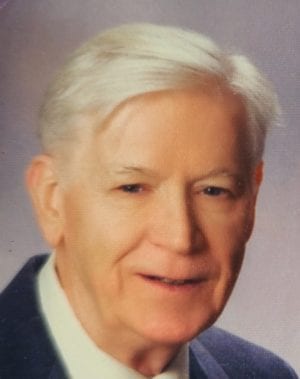 James A. Farley passed away in Saint Augustine, Florida, on July 11, 2021. He was born December 20, 1931, at home in Chatham, NJ, the youngest of six children of Peter and Kathryn (Walsh) Farley.

James graduated from The Oratory School, Summit in 1949, where he was an outstanding athlete, most notably in track events. He was also a nationally competitive speed skater. In his teens, he and his siblings helped their parents run their two businesses, the Millburn Recreation Bowling Academy and the Morris & Essex Roller Drome in Springfield.

James served in the Navy during the Korean War aboard the USS Newport News from 1951 to 1955. He met and married his wife Grace “Allison” Bowers in 1957. They had three children and resided in Irvington until 1972 when they moved to New Providence. In 2018 they moved to Florida to be cared for by their daughters. They were married nearly sixty-four years at the time of her death last November.

James worked for the US Postal Service for 35 years, beginning as a clerk, and retiring as Postmaster of New Providence Post Office. He earned a degree in Management from Rutgers University, attending part-time at night. After his retirement he spent much of his time caring for his grandsons and helping run the Farley Realty partnership. Most weekends he enjoyed attending high school sport events for his grandchildren and grand-nephews. He was a die-hard Notre Dame fan (Go Irish!)

He was a former member of the Knights of Columbus and of the American Legion. He spent many hours volunteering at Lyons VA hospital. He was a Gallon Plus club blood donor to the American Red Cross. Until he left for Florida, he was a daily communicant at Our Lady of Peace Catholic Church. In Florida he attended Corpus Christi Church in Saint Augustine.

James is survived by his oldest daughter, Patricia, and her husband, Leigh Stelzer of Saint Augustine, FL and Mount Pocono, PA; grandsons Victor Farley Neumark of Los Angeles, CA., Ian James Neumark and fiancée Megan Buckland of Westfield, NJ; sister Kathryn (Kitty) Keating of Berkeley Heights; sister-in-law S. Hollace Bowers of N. Charleston, SC; many nieces, nephews, and grand-nieces and -nephews. He was preceded in death by his beloved wife Allison (November 2020), his son James P. Farley (1994) and his daughter Maureen K. Farley (July 2019); brothers Peter and Francis and sisters Mary Farley Bender and Theresa Farley Samartin. Countless thanks to Felicia, and to Cindy and her team for nearly 3 years of TLC. There truly are Angels on Earth.

Family and friends are invited to attend his Wake from 4 to 8 pm Sunday July 18 at Bradley, Brough & Dangler Funeral Home in Summit. Funeral mass at 10 a.m. Monday at Our Lady of Peace Church, New Providence, followed by interment at St. Teresa’s Cemetery, Summit.