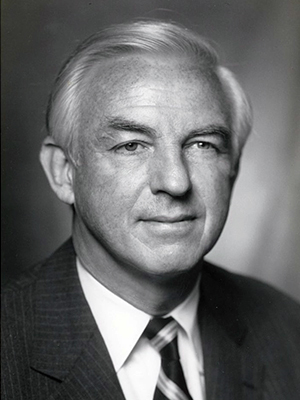 James Overman Welch, Jr. died peacefully on October 6, 2019 with his loving wife and their sons at his side.

Mr. Welch was born on May 13, 1931, in Cambridge, Massachusetts, grew up in Belmont, Massachusetts and attended Belmont Hill School. Mr. Welch matriculated at Harvard College where he played varsity hockey, earning his AB in 1952. After college, he attended Naval Officer Candidate School in Newport, RI. Once commissioned an ensign, Mr. Welch was assigned to the engineering department on the USS Hambleton, a destroyer minesweeper in Charleston, South Carolina, where he completed his naval career in 1955 as Lieutenant Junior Grade and Chief Engineer.

Upon leaving the Navy, Mr. Welch subsequently joined the family business, the James O. Welch Company, a national candy and chocolate business with brands such as Junior Mints, Sugar Daddy and Sugar Babies. This company was sold to Nabisco, Inc. in 1963. After serving as President of the candy division for several years, Mr. Welch was transferred to Nabisco headquarters in New Jersey. During this period he was actively involved in the Billie Jean King/Bobby Riggs tennis match where Bobby Riggs presented Billie Jean King with a giant Sugar Daddy lollipop. Following this event, Mr. Welch was also active in Evel Knievel’s attempted jump of the Snake River which proved to be an ideal double entendre to promote Chuckles jelly candy with the slogan “Evel Knievel goes for Chuckles” on every bag.

Mr. Welch was a Director of Vanguard Mutual Funds from 1974-2001, Teco Energy from 1976-2006, Kmart from 1995 to 2001, The Christopher & Dana Reeve Foundation and its predecessors from 1989 to the present and trustee of the New York Chapter of the Multiple Sclerosis Society from 1987 to 2013. He served as a trustee of The Park School of Brookline, Massachusetts, Noble and Greenough School of Dedham, Massachusetts and The Pingry School of Martinsville, New Jersey. He was also Chairman of an undergraduate education committee at Harvard University and was active on several other standing committees at the university.

Mr. Welch was an enthusiastic skier and tennis player with his wife Virginia (Ginny) and their children. This was especially true upon his retirement after the sale of RJR Nabisco to Kohlberg Kravis Roberts & Co. in 1989. He also enjoyed boating and spending time in the North Shore of Massachusetts throughout the course of his life. Mr. Welch was admired for many qualities, but, above all else, for his love of his family. In addition to Ginny, he leaves his sister (Deborah LaGorce), six sons, James, Leighton, Miles, Christopher, Gardiner and Samuel and their lovely wives and 19 grandchildren.