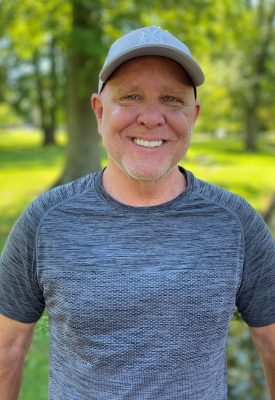 Jim was born in Englewood, NJ and raised in Dumont by his parents, John and Arlene, along with his siblings. After attending Dumont High School, Jim went on to attend The Kings College, and Southeastern  Baptist Theological Seminary where he obtained a Masters of Divinity.  His faith, family and friends were everything to him! He loved cheering for the Yankees throughout his life! In 1999 he began his journey with Chick-Fil-A in NC, and in 2003 became Owner & Operator of Chick-Fil-A at Woodbridge Center Mall.  In 2013 he opened the first Free Standing Chick-fil-A in Central NJ, in Union Township.  In June 2023, he would be celebrating his 20th year with the company.

Jim was a man with strong faith and an active member of every church he attended. He served as an elder at  First Baptist Metuchen as well as other churches he attended. He also served as Youth Pastor and interim pastor at the churches he attended in Florida and NC respectively.  He currently attended Renaissance Church in Springfield, NJ where he served as Community Group Leader.  His strength and faith in the Lord were felt by everyone around him. He loved his kids and wife more than anything. He was the BEST Husband, Dad, Papa, brother, son, uncle, friend, and man. He was the BEST EVERYTHING!!! Faith, Family, fast cars, and Chick-fil-A sum up his life!

Jim is survived by his loving wife, Stacie, his children, Bryan (Lacey) Strole, Kelsey (John) Magnanti, Karin Strole, his step-children, Jackson (Ana) Painter, Marlee (Mason) McFarland, and Sam Painter. He will be dearly missed by his granddaughters, Cambria, Aubree, Haley, Maddie, Ellie and Miller. He will be missed by his many relatives, friends, and his Chick-fil-A family.

A funeral service will be held on Monday, November 14th, 2022 at 11am at the Renaissance Church, 639 Mountain Ave, Springfield, NJ with a burial to follow at Fairview Cemetery, Westfield, NJ.  We are working on setting up an education fund for his grandchildren where donations can be made in Jim’s memory. (If your wishes are to send flowers, please have them delivered to the church)