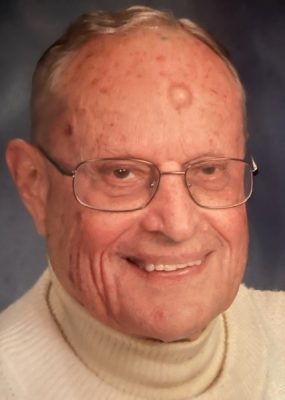 John Powell Williams, 96, of Chatham, NJ passed away on October 24th, 2022.  Born on July 6th, 1926 in Lynchberg, VA, he was raised in Richmond, VA and Chattanooga, TN.  Powell received a B.S. in Electrical Engineering from Virginia Tech in 1947.  During WWII he was an Electrical Technicians Mate in the Navy.  Powell worked as a Distribution Engineer and Assistant to the Richmond District Manager for Virginia Electric and Power Company until 1957.  He joined Exxon Research and Engineering in 1957 and retired as an Engineering Advisor in 1986.  While with Exxon Powell designed and/or started up utility and environmental control facilities for projects at over 60 different refinery and chemical plants in more than 40 different countries.

Powell married the love of his life, Betty Black in Low Moor, VA on March 28th, 1953. They moved to Chatham, NJ in 1958. He was a charter member and first secretary of the Chatham Jaycees, past member, and program chairman of Chatham Rotary, served on the vestry at St. Paul’s Episcopal Church where he began attending in 1958.  In 1964, he was the fund-raising chairman for the construction of the present church.  Powell was crew chief on Chatham Emergency Squad for seven years, a member of Chatham Fish and Game Club for over 30 years and maintained a summer home at Lake Mohawk.

Powell was preceded in death by his wife of 55 years, Betty, and his daughter Susan. He is survived by his daughters Elizabeth (Robert) Wood and Kathyrn Spautz, seven grandchildren and 8 great-grandchildren.

A memorial service to celebrate Powell’s life will be held at St. Paul’s Episcopal Church, 200 Main St. in Chatham, NJ, on Friday, October 28th at 11:00am.

In lieu of flowers, donations in John Powell William’s name can be made to Chatham Emergency Squad or St. Paul’s Episcopal Church in Chatham.