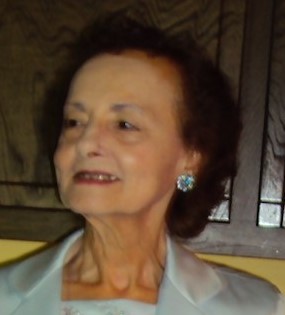 Lois T. Chapman passed away on April 1, 2022, at Laurel Circle in Bridgewater, NJ, where she had been living for the past six years.

Lois was born in Newark, NJ, on March 3rd, 1934, along with her twin sister Violet, to Maria Incoronata Terrezza and Luigi Antonio Terrezza. She had eight sisters and three brothers. She grew up in Newark in the family house on 9th Street. As a child she attended the First Italian Baptist Church with her dad and the Roman Catholic Church with her mom. She graduated Central High School, where she was a twirler and on the yearbook staff. She also performed in the school play.

She met her husband, Edwin W. Chapman, Jr., at Central High School and they dated until Eddie was drafted into the service and stationed in San Francisco. They married in Newark on July 28, 1957, and immediately flew to San Francisco, where they lived for a year before returning to Newark.

Lois and Eddie lived with Lois’s mom in Newark for a year and then moved to Piscataway, NJ. They were involved with Boy Scout Troop 27 and the Piscataway Elks Club and were elected Republican committeeman and committeewoman. They were on the Elks Crippled Children’s committee and helped at Elks Camp Moore and at charity events.

In 1980 she and Eddie moved to Hampton, NJ in a house they built on a mountainside. She began working at the Phillipsburg office, and studied to become a programmer. She passed the difficult coding course and began work as a programmer. She retired in 1991.

After Eddie died in 2009, Lois lived on her own for a while in Hampton, then moved in 2016 to an independent apartment in Arbor Glen Senior Living (now Laurel Circle) in Bridgewater, NJ. She resided there until her death.

Lois loved the ocean and spent many happy weeks in Cancun and Playa Del Carmen, Mexico. She and Eddie went on cruises to the Caribbean and Alaska and through the Panama Canal. They also hosted many family reunions at their home in Hampton. She loved to read, complete crossword puzzles, paint, stitch embroidery, and create ceramics.

Lois will be missed by her sons, Edwin and John, daughter-in-law Norma, sisters Violet and Betty Lou, and all her nieces and nephews and their children.