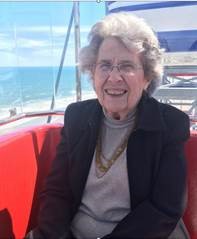 Marion A. O’Connor died peacefully on Tuesday, October 25, with her daughter by her side. She was 96.

Marion was born and raised in Newark. The daughter of Louis and Josephine Kohaut and sister to Louis and Dolores, she graduated from Blessed Sacrament School and Our Lady of Good Counsel High School. After graduation, she worked as a secretary for the Prudential Insurance Company. In her youth, she was a Girl Scout and later a Troop Leader in Newark.

She married Joseph O’Connor in 1949 and lived in Harrison and East Orange before moving to Union in 1961. In 2009, they moved to Pennington.

While her children were young, she served as a Cub Scout Den Mother and a Girl Scout Leader. An active member of St. Michael’s Parish, she belonged to the Rosary Altar Society and served as a Eucharistic Minister.

She and Joe were married for 64 years, raising 2 children, Paul and Kathy, and sharing all of life’s adventures including a 4-month stay in Switzerland and Europe for Joe’s work.

Marion was always a caregiver. Whether for her mother, mother-in-law, friends, or, in later years, her husband, she offered infinite love and compassion in tending to their needs. She also loved having the title Grandma following the birth of her grandson, Jack.

Marion was predeceased by parents, siblings and her husband, Joe.  She is survived by her son Paul of Chatham, her daughter and son-in-law Kathy and Tom Dallessio of Hopewell and her grandson, Jack Dallessio.