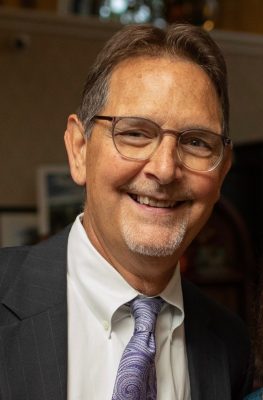 Peter Joseph Camelotto, 65, of Chatham, NJ passed away peacefully after a long illness on January 2, 2023, with his family by his side.

Born on October 5, 1957, in Morristown, NJ to the late Joseph and Rita [Padian] Camelotto, Peter’s childhood and life were spent surrounded by family, starting in the home his grandfather built on King Street. He graduated from Bayley Ellard and completed his bachelor’s degree at Bridgewater College, VA, where he served as Student Body Vice President and deepened his love for music, history, and having a good time. Peter met the love of his life, Janice, while they were working at the Olde Mill Inn. Following their marriage on January 5, 1985, Peter and Janice raised their three daughters in Chatham, NJ.

Over the years, Peter was actively involved in the Chatham community through St. Patrick Parish, Jaycees Christmas Tree Sale, and Chatham Recreation where he coached his daughters in various sports. Peter enthusiastically attended every game, play, and recital to include his nieces, nephews, and the children of his closest friends. He will be remembered as everyone’s biggest supporter.

His interests included playing basketball, which he continued to enjoy playing in the local men’s league until an illness sidelined him. He developed a love of cars from working at his father’s Elm Street Shell Gas Station. He will be remembered as a die-hard Yankees fan and often attended tailgates and games with family and friends, even tolerating Mets games just to be with his wife’s family. On a sunny day, you could find him outside enjoying a beer with friends, endeavoring to solve the world’s problems.  One of his cherished past times was making wine with close friends who became family. In recent years, Peter enjoyed traveling to new destinations with his wife and always looked forward to planning the next adventure. This past September, he was even able to enjoy one last week with his family at LBI. His passion for music lives on in his daughter Lauren, from buying her first Beatles album as a kid to pausing a conversation to appreciate the music. His love of food and cooking lives on in his daughter Michelle; he was always thrilled to spend time cooking in the kitchen, teaching and, in later years, learning new skills from her. Beginning with serving many years together at The Appalachia Help Weeks, his care and compassion for others lives on in his daughter Rachel.

Just like his mother, Peter leaves us with the gifts of laughter and love. He touched the lives of everyone he crossed paths with, and he will be missed beyond measure; he was larger-than-life. As he said every day to his daughters, “do the following every day and you will have a wonderful life… do good, have fun, learn something.”

Donations in Peter’s memory may be made to the Chatham Emergency Squad, www.chathamemergencysquad.org/donate

Letters of condolence can be posted at www.kudoboard.com/boards/rpHFBLt9