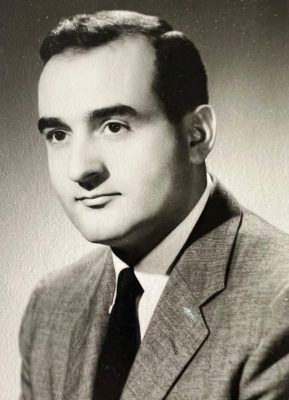 Throughout his long, fulfilling life, he was an educator, scientist, Eagle Scout, Order of the Arrow, Army veteran, golfer, wine connoisseur, entrepreneur, husband, father and grandfather.

Above all, Dr. Kapsimalis was known as a gentleman, and a gentle man.

Peter J. Kapsimalis was born in Newark, NJ on November 6, 1927. One of seven children, he graduated from Upsala College, where he studied religion. Dr. Kapsimalis earned his master’s degree in chemical engineering at Newark College of Engineering. He began his career as a chemist for Colgate-Palmolive-Peet and continued on to Schering Corp. He then went on to specialize in dentistry and endodontics at Temple University, graduating as valedictorian at the Kornberg School of Dentistry. He was given the Philadelphia County Dental Society Award, presented to the senior adjudged most outstanding by the faculty. He was awarded a fellowship in The American College of Dentists and was elected to the National Honor Society of Dentistry in dental research, having received three grants from the National Institutes of Health. Dr. Kapsimalis authored numerous papers published by the Journal of the American Dental Association. An adjunct professor at the University of Pennsylvania – Penn Dental Medicine, he was invited to lecture at various educational institutions around the world.

Dr. Kapsimalis was passionate about golf. A single-digit handicap, he had seven holes-in-one. As a member of Baltusrol Golf Club, John’s Island Club, Mid-Ocean Club, and Pine Valley Golf Club, he fulfilled his golfing bucket list, playing many of the great golf courses in the world, including Pebble Beach, Cypress Point and St. Andrew’s, to name a few. Playing golf with his children and later on his grandchildren, gave him great joy with their prowess on the course. In 1982, Dr. Kapsimalis helped establish the Holy Trinity Golf Classic (celebrating its 40th year), which benefits many Greek Orthodox charitable organizations.

A connoisseur of wine, Dr. Kapsimalis was a member of the La Chaine des Rotisseurs, the oldest and largest food and wine society in the world, and had an extensive private collection. He loved music and played trumpet and drums with a swing band while in the Army, stationed in Germany in 1945. He organized entertainment for the American troops, bringing in Big Bands such as Glen Miller and Benny Goodman. Music and dancing continued to play a large role throughout his life.

The family will receive friends from 4:00 pm to 8:00 pm on Tuesday, April 5 at the Bradley, Brough & Dangler Funeral Home at 299 Morris Avenue in Summit NJ. The funeral service will be held at 11:00 am on Wednesday, April 6 at the Holy Trinity Greek Orthodox Church, 250 Gallows Hill Road in Westfield, NJ. An interment will follow at Fairview Cemetery, Westfield, NJ. In lieu of flowers, donations may be made to the American Cancer Society.