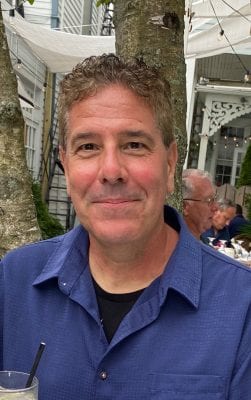 Philip Matrale, of Old Bridge, passed away suddenly on Saturday November 21. Phil was born on June 21, 1960 in Orange, NJ and grew up in Union before moving to Old Bridge with his wife in 1993.

He married Dorothy (Dittemer) in 1992, at a beautiful mass at St Michael’s and was married for 28 years. The couple moved to Old Bridge in 1993, where they were parishioners of St Ambrose Church and their children attended the parochial school.  Phil leaves behind his loving wife and 3 beautiful daughters Lauren (25) Julie Anne (22) and Carissa (17). His family is devastated by his untimely passing.

In high school as a parishioner of St. Michael’s, Phil became involved in Union County CYO and the Search and Crossroads programs. He felt a true calling to help others and although he worked briefly at Xerox and Seton Hall University after college graduation, in 1986 he found the job he was meant for in St Michael’s as the Youth Ministry Director. It started as a part time job, but soon evolved into a full-time ministry that over the years has touched thousands of young lives. He grew a small youth group of less than 20 to an unbelievable group that would draw hundreds of teens from Union and surrounding towns. He ran weekly topic nights on Tuesdays where all were welcome to come to learn and share. There were faith teachings, retreats and many community service projects teaching the youth to give back to the community and the less fortunate. In 2004 the program merged with Holy Spirt Youth Ministry to become St Michael’s /Holy Spirt CYO Youth Ministry reaching even more young Christians.

Phil was the 2013 recipient Of the Blessed John Paul II Award from the Archdiocese of Newark for his Years of work and dedication to the Youth. He was also named Union’s Man of the Year by UNICO in 1990 and again about 15 years later. He officially had April 29 on Union’s calendar as “Phil Matrale Day.”

In his personal life, Phil was an amazing husband and father. He selflessly put his family above all else and they adored him. He volunteered at St Ambrose for whatever he was needed for, whether it was the book fair, the carnival or just painting walls and cleaning. He was “Class Dad” for many years and was loved by parents, teachers and students alike. When his daughters got older, he also volunteered at Bishop Ahr High School doing odd jobs and running the football kitchen, as well as always helping out at his daughter’s dance studio. There was nothing he wouldn’t do for his girls, his family and his friends. He was also an avid comic book collector and loved vacationing with his family, especially to Walt Disney World and Aruba.

He was predeceased by his parents Donald Jr.  and Concetta Matrale of Union, and leaves behind his wife and daughters, his brothers Donald Matrale III of Chatham, Paul Matrale of Spring Lake and his sister Tina Matrale of Maudlin SC.

Phil leaves behind a legacy of love light and faith. He would challenge everyone who knew him through the years to spread the faith, the love and the light. His goodness will live on through all of the lives that he has touched.

Funeral Home:
Bradley, Haeberle & Barth Funeral Home Visitation Hours:
Friday, November 27, 2020 from 4:30-8:30 pm at St. Michaels Church
Due to COVID 19 restrictions, you MUST sign up for an assigned time slot to attend using the link on this page- masks and respectful social distancing will be required Funeral:
At this time, the funeral mass is PRIVATE. The tickets obtained from the St. Michael's website are NOT valid for admission Committal:
Private Memorial Gifts:
Those who wish may contribute in his memory to St. Michael the Archangel Church, 1212 Kelly St., Union, NJ 07083