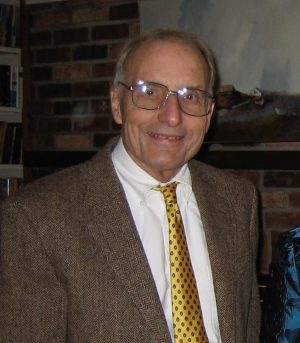 S. Gilmer “Gil” Towell, 93, of Maplewood and formerly of Short Hills. NJ passed away on March 30, 2022 surrounded by his family.

Gil was born on November 18, 1928 in New York City, New York, the son of the late Mr. and Mrs. Sydney and Gladys (nee Gilmer) Towell. He grew up in Bronxville, NY, lived there after his marriage until 1969 when he settled in Short Hills, NJ where he raised his family.

He graduated from Hamilton College, Phi Beta Kappa, in 1950 and Harvard Law School in 1953. Gil served in the United States Army from 1954-1956. After leaving the Army, he worked for a law firm then known as Royal, Koegel & Wells.  He retired as an Assistant General Counsel for Prudential Life Insurance Company of America, Newark, NJ.

Gil was a member of Christ Church in Short Hills, where he volunteered tending the rose garden.  His adult involvement in scouting included being the Scoutmaster of Troop 15(Short Hills), and service at the district level. He was awarded the Silver Beaver.  Three years ago he was awarded the St. George medal for years of service to the Episcopal Church & Boy Scouts.  Gil was a volunteer at the Neighborhood House of Milburn, and at Greenwood Gardens. He was a former president of the Alumni Association of Hamilton College.  Gil was a member of the NY and NJ Bar Associations.  He enjoyed gardening and woodworking and was a lifelong and avid downhill skier.

Gil is survived by his wife of 64 years, Juli Shea Towell. He was the loving father of daughter, Jennifer Towell Smith, her husband Christopher VB Smith, and son, Geoffrey Gilmer Towell and wife Elizabeth C. Towell. He was the cherished grandfather of Alissa Smith-Comstock, Nicholas VB Smith, Elizabeth Smith Madison, Devon C. Towell, Sydney E. Towell and great-granddaughter Cecelia A. Comstock. In addition, he is survived by his sister, Cynthia Towell Shively and many nieces and nephews.  He was predeceased by his brother, David Gilmer Towell.