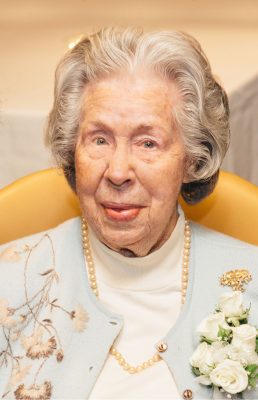 Winnogene O. Lancaster (nee Franke) died peacefully in her sleep on the evening of Friday June 3.  She was 107.

Winnogene was born in Union NJ and lived her early life in Irvington NJ with her parents, John R. Franke and Emma M. Franke (nee Castles), and her brother John R. Franke Jr.  Her father and grandfather Joseph T. Castles were prominent in the New Jersey business community.  She graduated from Upsala College in East Orange in 1935, after which she lived for a year in Manhattan before returning to Irvington to work as a secretary at a mortgage company.  In 1947 she married Roger F. Lancaster, a prominent New Jersey trial attorney, and moved to Maplewood NJ.

Winnogene was a loving mother and wife.  She enjoyed ski trips to Vermont and the Adirondack mountains, sailing on the family sloop, summers at the Jersey Shore, spending time in the countryside at Packanack and Paulinskill Lakes in northern NJ, and most of all, her beloved family and home.

She is survived by her two children Roger and Julia, her four grandchildren Hillary, Blythe, Kyle and Molly, and her five great-grandchildren Frieda, Roger, Henry, Thomas and Daniel.  She will be missed.

A funeral service will be held at Bradley, Haeberle & Barth Funeral Home, 1100 Pine Ave. in Union on Saturday, June 11th at 11:30am followed by interment at Hollywood Memorial Park, also in Union.